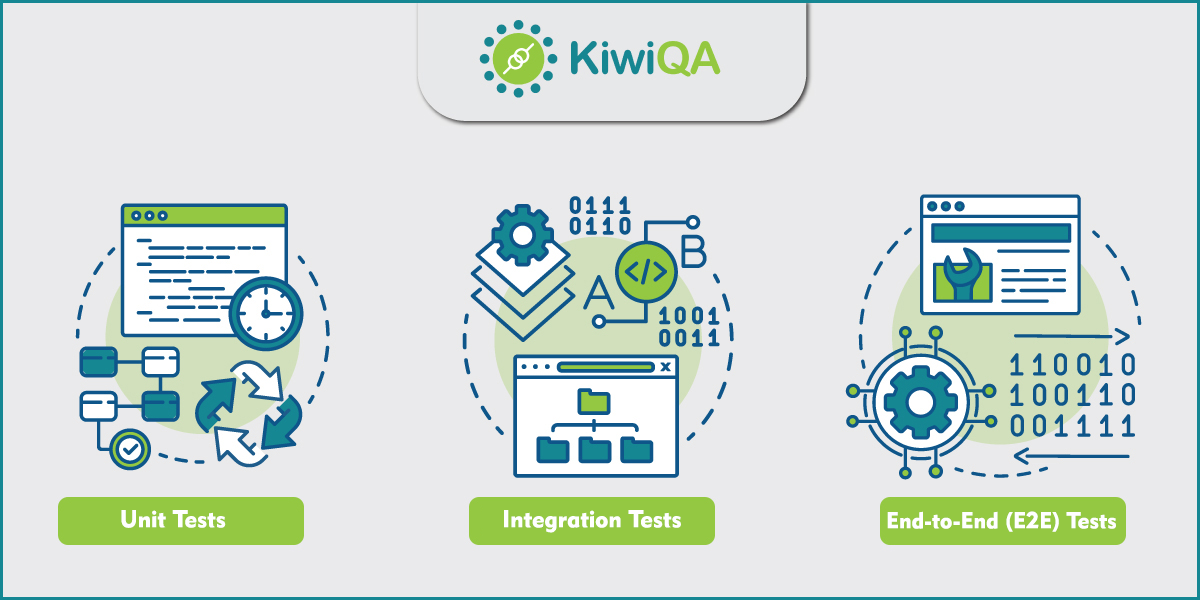 One of the essentials for an expedited delivery of a software project is timely execution of exhaustive test suites. Software developers should not spend too much time waiting for the automation test suites to run. Every issue discovered during the testing phase needs a suitable fix in the source code!

As it is rightly mentioned, bugs do not vanish overnight; unless the issue is just a one-off thing 🙂 Developers need to re-run the same test suites only when a new test method is added in the suite to validate the new fix added in the code.

This is where understanding of the ‘Test Automation Pyramid’ framework can play a major role in guiding the development team towards building a top-notch quality product. Test Automation Pyramid stresses that developers must majorly focus on low-level application tests (i.e. unit testing, component testing, and functional testing). A majority part of the test suite must comprise the above categories of tests.

In this blog, we deep dive into the nitty-gritty of the Test Automation Pyramid and why it is important for developers to focus on the pyramid to reap the benefits of testing.

What is Test Automation?

Before we explore the Test Automation Pyramid, let us recap the basics of automation testing. As the name indicates, test automation is the process of creating tests using an automated framework (or tool).  Tasks that are repetitive and time-consuming are the best candidates for automation testing.

Automated software testing can be leveraged by test teams so that they can focus on other forms of testing (e.g. exploratory testing) that require manual intervention.

Also Read – How To Migrate From Manual Testing To Automation Testing?

Let’s unlock the answer to the above question in the upcoming section of this blog.

What is Test Automation Pyramid ?

To start with, let me reiterate that there are a number of different versions of the Test Automation Pyramid available on the internet. Though they might seem different, the overall concept of the Pyramid still remains the same!

In a nutshell, the concepts remain the same but the terminologies might be different – component testing vs. functional testing, E2E (End-to-End) testing vs. system testing, and so on.

A million $ question is “Can the tests be reversed when assigning them to the pyramid?” As mentioned earlier, the terminologies might differ but it is important to maintain the same sequence in the pyramid.

This is where the expertise of an automation testing services company might be helpful, as teams can better plan and execute the tests that are a part of the Test Automation Pyramid.

Also Read – Why To Choose Selenium Framework For Automation Testing?

Now that we have covered the top-level concepts of the Pyramid, let’s look at breaking down the blocks of the Test Automation Pyramid.

Unit tests are normally written by the developers since tests verify the functionalities at a unit level. Since the testing is performed at a module (or unit level), there is no surety if the codebase will work when it is integrated with other modules in the system.

Many times, the dependent modules (e.g. method, class, etc.) might be under development. In  such scenarios, holding up the unit test might elongate the entire process. This is where Mocking helps to a huge extent, as the approach mocks interfaces (or adds dummy interfaces) of the external modules (that are still under development).

Mockito is a popular Java-based mocking framework. If you are a JavaScript user, you should check out the Sinon mocking framework. Mocks provide a tighter control over the components used by the AUT (Application Under Test). It also reduces the dependency of the unit test code on the external components that might cause issues on the ‘unit level tests’.

As interactions with the external components are not a part of unit testing, it is important to perform integration testing for ensuring that different blocks function as expected when they are integrated together.

Integration tests occupy the middle-layer of the Test Automation Pyramid. In simple terms, integration tests are used for testing the software functionalities as a complete package. Unlike unit tests, interactions with the external components are given priority in integration tests.

Can someone release a product just by performing tests at a unit level? Well, even a simple piece of software has to go through integration tests since modules talk to each other and if one fails, the entire system might falter!

Calls to databases, integration with external web services, etc. are the highlights of integration testing. However, integration tests might still not suffice for releasing a top-notch software product to the end-customers. This is why E2E (End-to-End) tests are at the top of the Pyramid.

As the name indicates, E2E testing helps in testing every aspect of the product. E2E tests verify the core business logic, front-end, and back-end aspects of the software.

An important point to note about E2E testing is that the tests can be slow and flaky (or fragile). This is primarily because the tests have external dependencies that may or may not be reliable.